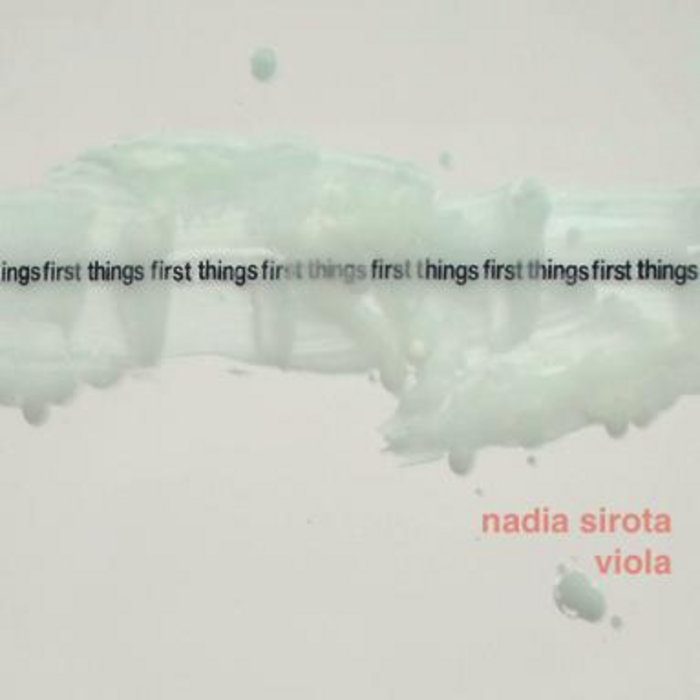 Violist Nadia Sirota, one of the leading lights of New York’s “indie-classical” scene, takes center stage with her debut recording, first things first, issued by New Amsterdam Records on May 19. Hailed by Time Out New York as one of New York’s “brightest, busiest players,” Nadia has earned praise for her “command and eloquence” (Boston Globe), as well as her “energy, fluidity, [and] ear for electronic coloration” (New York Times). The twenty-something musician has commissioned and premiered works by some of the most talented composers of her generation, particularly the three whose music appears on first things first: Marcos Balter, Judd Greenstein, and Nico Muhly. The disc comprises five solo tracks plus Muhly’s “Duet No. 1″ (with cellist Clarice Jensen) and Greenstein’s ”The Night Gatherers”, featuring Sirota and The Chiara String Quartet.

The music on first things first ranges from Balter’s experiments in color and texture in “Ut” and ”Live Water” to Muhly’s idiosyncratic takes on Minimalism (“Duet No. 1″, ”Etudes I and IA”) to Greenstein’s tense, insistent Escape and lush, elegiac The Night Gatherers. Says Nadia, “For me this album is a kind of summation of projects and friendships that started in my early twenties. Nico I met at school, and Judd and Marcos were both Fellows at the Tanglewood Music Center with me… All of these personal connections make this record really special for me, but more importantly, all three of these guys have really strong, individual voices. Their music is innovative, and yet feels timely and inevitable. I am so pleased to interpret their work, and I am thrilled to release this first record.”

first things first has been praised as a “collection of vital, imaginative recent scores” and Sirota’s playing “vigorous” by The New York Times, who also called the compelling performance of Greenstein’s “The Night Gatherers” “rich” and “haunting.” The album has also been cited as an “excellent debut … that’s imaginative and often thrilling” (Time Out Chicago) by the viola’s brilliant and quirky new champion” (eMusic).

Bandcamp Daily  your guide to the world of Bandcamp

Interviews With Butcher Brown and Slauson Malone, plus LP of the week by SAULT.